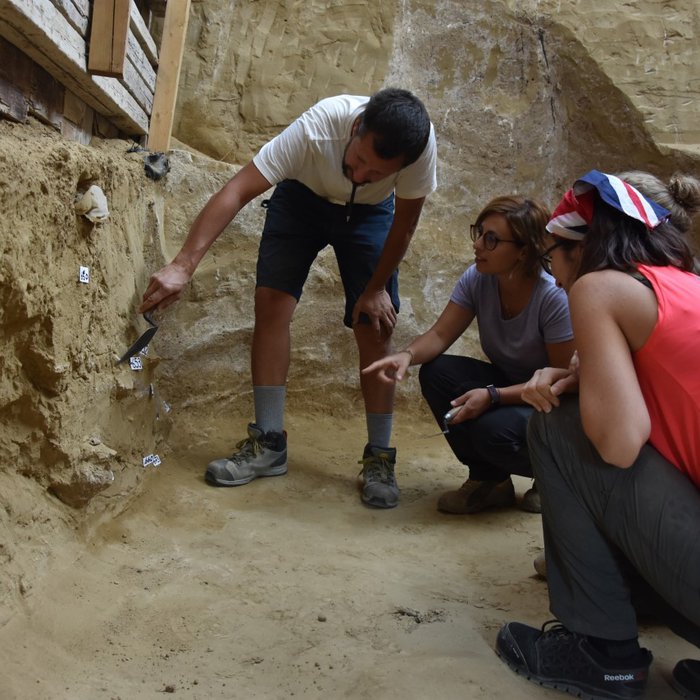 An international collaboration was launched in 2010 within a research project of the Greek Ministry of Culture (Greek Archaeological Museum of Eghion) in order to excavate the ancient site of Trapezà. Trapezà is a natural acropolis located about 7 km from the coast, in the vicinity of the city of Eghion, in Achaea (North-Western Peloponnese), which was once the seat of the archaic city of Rhypes – the motherland of many Achaean colonies in Italy – as well as of a monumental temple. The University of Udine research group, directed by Prof. Elisabetta Borgna, composed of doctoral students and assistant lecturers, and coordinated through a series of external collaborations, deals with the study of the prehistoric and pre-classical occupation of the area.

Field activities have returned important archaeological evidence dating from the 4th–3rd millennial BC to the transitional period between the Bronze and Iron Age (ca. 11th–8th century BC). The project to date has been financed by the Institute for Aegean Prehistory (Philadelphia) (2010–2017), the Istituto Italiano di Preistoria e Protostoria (Florence) (2012; 2016), the Italian Ministry of Education (MIUR) (2010), the Italian Ministry of Foreign Affairs (2014–2016), the University of Udine (2014–2016), the Interuniversity Postgraduate School of Archaeological Heritage (Trieste-Udine-Venezia) (2011–2013), as well as by private sponsors (Gruppo Monte Mare – Grado) (2014), and by the Society for Archaeological Research in Aigialia, Eghion (2010-2013).

Research activities currently focus on the excavation and the study of a large Mycenaean necropolis (15th–11th century BC) of underground chamber tombs, with wide access corridors and connected structures (niches, ossuaries, and side-chambers). Materials and contexts are significant for the investigation of some crucial topics of Greek prehistory and history, from the development of the Mycenaean culture to the relationship between palaces and peripheries, funeral practices, the problem of continuity and discontinuity between the Bronze and Historical Age, the origins of the Greek temple and – considering the strategic position of the site, located on the Gulf of Corinth – the dynamics of long-distance relationships between the Eastern Aegean, Adriatic and central Mediterranean in the "pre-colonial" age.

Another focus of the field activities – conducted by Assunta Mercogliano in the context of her Ph.D. research – is a village dating back to the middle Bronze Age and the Early Mycenaean period. The village is located a few hundred meters south of the necropolis and was discovered by the research team after a survey in 2013.