Transition or Revolution? Towards a new paradigm of French Language and Literature between Middle Ages and Renaissance 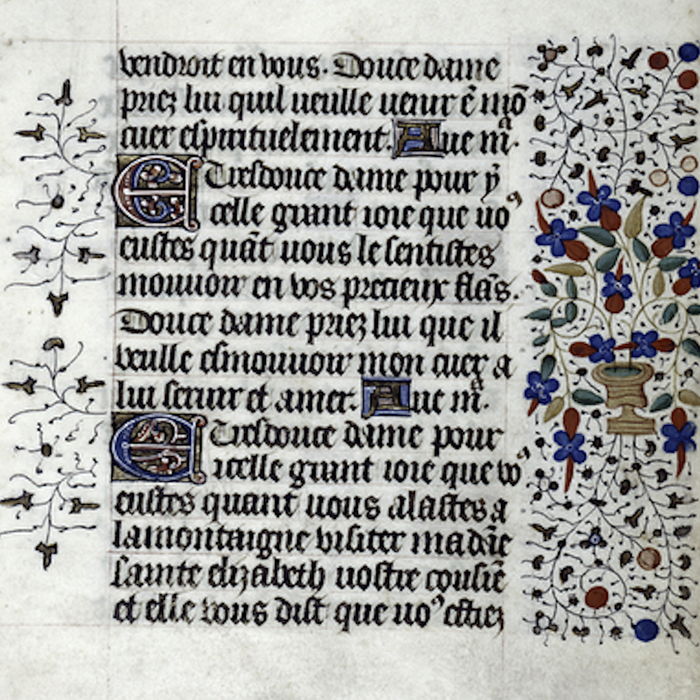 The analogy between the contemporary world – still suspended between a culture of objects and a “virtual” culture – and the decades between the 15th and the 16th centuries, is now well established. In France, the transition from the “Middle Ages” to the “Renaissance” has been traditionally interpreted by scholars as a true “caesura” like that between verse as a privileged narrative form and prose as the sole possible “medium”, or the “opposition” between hand-written texts and printed books mechanically reproduced. The 15th and 16th centuries are also identified with a linguistic evolution, from “Moyen Français” to pre-classic or Renaissance French, a distinction having no obvious modern equivalent.
Based on studies that have prompted reconsideration of the traditional view, the project aims to renew the approach to this historical period (15th and 16th centuries), which represents the watershed to modern French culture, by providing a repertory of the rewritings in prose of “minor” genres and the first inventory of medieval texts issued in print. The repertory represents a completion of the project PRIN 2009-EAF4CL ("Riscrivere in prosa nella Francia dei secoli XIV-XVI: dal repertorio delle opere ad una proposta di revisione critica"), focused on the rewritings in prose of romances and epics previously composed in verse. This research resulted in the publication of the Nouveau Répertoire de mises en prose (dir. Colombo Timelli, Ferrari, Schoysman, Suard, Paris, 2014, 929 p.). Thanks to these studies, enthusiastically welcomed by international scholars, it is now clear that the uniquely French phenomenon of rewritings also concerns genres other than romances and epic poems. Consequently, the research needs to be broadened to include the so-called “minor”, but no less important, genres: short narrative texts, Ovidian matter, hagiography, allegorical and edifying texts, as well as didactic and theatrical works. Like its predecessor, the new repertory will include an inventory of the works, an examination of texts, sources, handwritten and printed witnesses.
The inventory relies on solid, preliminary research undertaken by the applicants in an international context. These investigations have demonstrated the prominence of medieval literature in early printed editions (incunabula and 16th century prints). In its major centers (Paris and Lyon) as well as in outlying cities, printing contributed undeniably to the diffusion of medieval texts, while at the same time, revolutionizing the book market and modifying the standard of texts, in response to the demand of a new, enlarged public. Furthermore, printing shaped a “canon” that extended into the 19th century, through different editorial “systems” (the “Bibliothèque Bleue”, for instance). Such an inventory, currently lacking, would provide essential information on the role of the first printers as gate-keepers of culture, thereby demonstrating a continuity which tends to be ignored in the academic field. Medievalists and 16th-century specialists, historians of manuscripts and printed books, are now beginning a dialogue with linguists and philologists, discovering that the so-called “revolution” which would have led from the Middle Ages to the Modern Age is made in fact more of transitions and coexistences than of abrupt fractures and interruptions.
Both the repertory and the inventory will be undertaken in parallel with studies and critical editions for which the applicants and the participants have already shown interest. Many rewritings in prose of “medieval” texts composed during the 15th and 16th centuries can provide primary materials for studies on the evolution of the French Language, on literary production and, more generally, on culture and mentality. Moreover, by overcoming the conceptual "caesura" between “medieval” and “Renaissance”, studies can be reconsidered from a new perspective and new critical editions of texts belonging to that period can be published. This kind of project is by nature interdisciplinary, as it concerns the history of the French Language and literature, codicology, philology, and the history of the book. As such, it will involve a group of young researchers, invited to participate under the direction of the resident scholars in each Unit. Furthermore, the project will avail itself of a broad European network of scholars with whom the team has worked for many years (especially with the French-Italian-Belgian group LIMIA – "Littérature d'Inspiration Médiévale dans les Imprimés Anciens"). It can rely on a wide dissemination of scientific results and on an international profile, thanks also to the collaboration with the international, prestigious publisher Classiques Garnier, Paris.