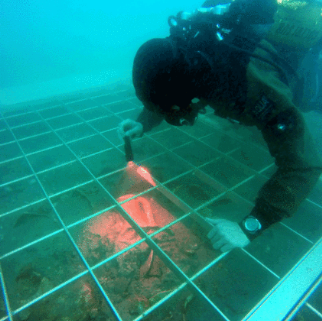 In the field of sciences focusing on the ancient world, the group deals with particular aspects of the archaeological research, and more specifically those relating to the so-called Water Archaeology, namely the diachronical study of the relational dynamics between human and water through the analysis of every source possible, and with special competences for underwater investigations and nautical archaeology.

Starting from the regional reality, the group has developed a sound expertise in river and lagoon environment, as well as in off-shore marine sites, thanks to the collaboration with Ministerial Institutions and other Universities, both in North-Eastern Italy and in other countries (i.e. the Texas A&M University and the Institute of Nautical Archaeology).

In addition to the main lines of research, which concern the work and documentation techniques applied to underwater Archaeology, and the principles and methods of the ancient and medieval shipbuilding, the group directed its activity also towards the reconstruction of water landscapes. More specifically, the research team exploits since 2011 the Stella river (Anaxum for the Romans) as laboratory in order to train underwater archaeologists (graduating and Ph.D. students) in a problematic environment such as the riverine one. The main objective in this case is the reconstruction of the relation man-river over time: the influence of the river on human settlements, on the production choices of the local communities and conversely, the human intervention on the river itself, all this by developing advanced and supplementary technicques, which could be used also in other waterways.

Special attention is also given to the dissemination of knowledge about the submerged and semi-submerged cultural heritage, not only through the recovery of underwater deposits and the setting up of exhibitions and museums for the promotion of the historical-archaeological and nautical heritage, but also through the development of innovative models of public participation to the archaeological discoveries and of new forms of sustainable cultural tourism.

The group takes also advantage of the Underwater Archaeology Lab.