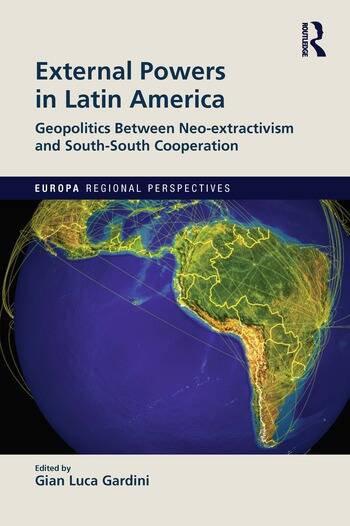 This book examines the role of external powers in Latin America in the 21st century. Non-traditional partners have significantly increased their political and economic engagement with the continent. Five key questions arise: why has this surge taken place; when has it happened; in which regions and sectors is it mostly felt; what is the Latin American perspective; and what are the actual results? The book analyses 16 case studies: the United States, the European Union, China, Russia, Japan, Canada, India, Turkey, Iran, Israel, South Korea, Taiwan, Indonesia, the ASEAN countries, South Africa and Australia. The spectrum of existing explanations in the literature spans from neo-extractivism to South-South cooperation. This volume places them in context and proposes a more multifaceted approach, stressing a combination of systemic factors and internal dynamics both in Latin America and in the external partner countries. Geopolitics still matters and so do nation states, their interests and leaders. Ultimately, this surge in engagement has largely reproduced past patterns. Are new partners that different from the old ones?

GIAN LUCA GARDINI is Professor of International Relations and Chair of International Business and Society Relations with focus on Latin America at Friedrich-Alexander University, Germany. He has a vast experience as an academic and a practitioner of international affairs. He has held teaching and visiting positions at the University of Cambridge and Bath in the UK, Shandong University in China, the University of Sao Paulo in Brazil and the University of Bologna in Italy. He has collaborated with the OECD, the Chilean Foreign Ministry, the House of Lords, the UK Foreign Office and the Foreign Policy Instrument of the European Union among others. His research interests cover the international relations of Latin America, the impact of COVID-19 on international affairs, international trade and trade policy, foreign policy analysis, and comparative regional integration. Among his recent books are Interregionalism and the Americas (2018) and The World before and after Covid-19 (2020).